Amazing What a Dozen Doughnuts Can-Dough 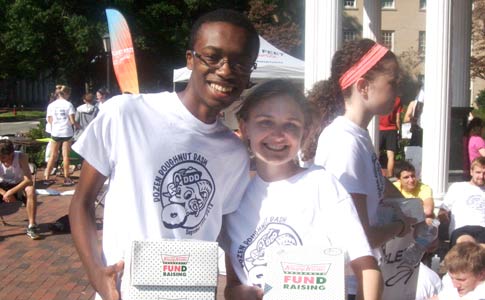 I’m well-known for my fleet feet and even better known for my sweet tooth. So when the opportunity presented itself to put both together, I couldn’t back down. UNC students recently held the second annual Dozen Doughnut Dash to raise money for the UNC Lineberger Comprehensive Cancer Center.

And I was there with my feet behind … the check-in line. Although my jaw is still intact, a running injury to my knee kept me from running the race. But that didn’t mean that I couldn’t participate.

Instead, I volunteered, registering last-minute runners and checking in those runners who planned — and trained — weeks in advance to run four miles and eat a dozen doughnuts faster than the next guy.

Several UNC students, including Renee Psenka, Christian Bennett, Tricia Cleppe, Ty Fenton and Bobby Mook, founded the event last year. The race was modeled after another university with a Krispy Kreme right around the corner. N.C. State students started the race back in 2004, and it quickly soared to the top of the university’s graduation bucket list. In 2011 alone, 7,500 runners came together to raise $122,0000 for N.C. Children’s Hospital. What can you say? Even the Wolfpack stumble upon a good idea every once and a while.

This year, UNC volunteers wanted to give State students — who run in February — a race for their doughnuts. So we painted the cube and hung hundreds of signs all around campus: “Glaze Your Own Trail,” “I Put the Team on my Back Dough … nuts” and, my personal favorite, “Dough Out in a Glaze of Glory.”

And judging from the results, a few guys really took that challenge seriously. The top runner, sophomore Connor Belson, came in first at 28 minutes and 34 seconds. And you thought you could really put away those doughnuts!

Of course, Belson and the other 125 runners raced with a mission, raising about $6,000 this year, combining with last year’s dough for a grand total of about $20,000 for the cancer center. Some raced competitively (meaning that 2.5 miles into the race they ate, or attempted to eat, a whole box of doughnuts, before dashing off for another 1.5 miles) while others set their limits earlier and ran and ate more slowly.

The atmosphere on race day was intoxicating. Racers gathered at the Old Well shortly before the 9 a.m. start time, stretching their legs, arms and jaws and reminding each other why they were getting up so early on a Saturday morning: to fight cancer, one Hot, Fresh & Now at a time.

Meanwhile, about 40 volunteers took direction signs and coolers of water to strategic points along the route, where they could cheer on the ashen-faced runners post-doughnut intake. Other volunteers — the ones who actually enjoyed seeing those ashen faces and were disappointed by this year’s low number of pukers, a grand total of five — stationed themselves at the Old Well to supervise the doughnut-eating portion of the race.

Competitive runners all tried different strategies — some ate standing up, while others kneeled by the Old Well to stuff their faces. Some dunked the doughnuts in water for easier consumption, while others smashed three together and ate them in sandwich-style. But no matter their eating strategies they all rallied for one cause: to do their small part to put an end to cancer.

This year’s doughnut dash was a success. And we hope that next year we get even more runners and volunteers to raise even more money for cancer research (and to beat State!). But we need your help. Pass the word, dough … nut.

View a student-produced video from the Dozen Doughnut Dash.