Student Blogs: They Called Us “Beautiful,” But… 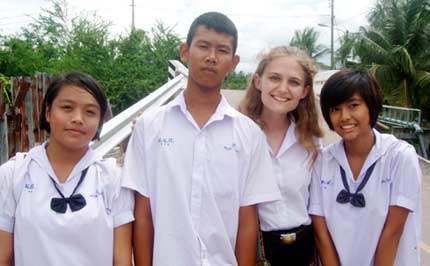 They Called Us “Beautiful,” But …

Our last weekend in Thailand, the Carolina Southeast Asia Summer Program left Bangkok for the countryside. First we traveled to Samutsongkhram, where we visited a junior high school. We’d taken a tour bus, but the roads were so bad in Samutsongkhram that our bus couldn’t make it over the bridge leading to the school. So, we got out and walked the rest of the way to the school, passing by houses with elderly women waving and smiling at us from the porch steps.

Our first view of the school upon our arrival was that of a large green with a flagpole in the center. But then we were welcomed by several teachers and directors, as children (the youngest were not yet 5) in black-and-white uniforms peaked their heads out from behind the swing sets. The directors offered us cold glasses of homemade juice naturally died with the pigments of Thai flowers. We gulped appreciatively. Then, unable to resist the quiet smiles of the younger children, we started a game of tag.

Most of us hadn’t had recess since graduating from elementary school, but we quickly discovered that it was still just as much fun (and rather similar) to how it used to be. We taught them London Bridge and Ring Around the Rosy, the latter of which was a rousing success despite the language barrier, which meant that we “all fell down” at all the wrong times.

The children spoke little English, their vocabulary limited to “hello,” “what is your name?” and “beautiful,” the latter of which they called us for the duration of our stay, despite our flushed cheeks and sweaty everything.

One beautiful 8-year-old girl with large dimples and hair cropped short attached herself to my side and never parted. Eventually, she led me to the seesaw, where we played, six children to a side. When we tired of that, we ventured to the swing set, which proved more fun in theory than actuality; as the swings had been made for little children, my feet scraped the ground with every push, no matter how far I drew up my legs.

Like always, recess ended all too quickly, and we were called into lunch: a beautiful feast of rice, vegetables and Tom Yum soup with shrimp. At first we assumed that the meal had been prepared for our visit, but then we discovered that this was only a slight alteration to a typical cafeteria meal; we overheard the teachers explaining to the students that today’s lunch wouldn’t be spicy because it had been especially made for “our American friends.” Still, this un-spicy meal had half our group glugging water and wiping their brows.

We ate at long wooden tables with a great view of some of the boys taking up a game of basketball. They played according to traditional rules, with two boys standing on chairs and holding baskets for the goals. Those not playing basketball amused themselves by setting magnifying glasses over little piles of sticks, and, unlike the countless failed attempts that I made in my childhood, they quickly had tiny bursts of flames at their disposal.

Several of us considered lunch an excellent time to take a bathroom break, but upon visiting the restroom we discovered just how wrong we had been: a gigantic fist-sized spider sat twiddling its legs from the toilet bowl. Each of us entered the bathroom sure that we could handle a small spider and left moments later assuring the next person they were better off squeezing their legs together.

After lunch, we toured the junior high school portion of the school. We were told that typically students in the country quit school after about the age of 14, when the expense (transportation and even school uniforms) becomes too much and they drop out to find jobs to help support their families. Therefore, in the last year of schooling at the junior high school, they put away the math, science and literature textbooks and instead hone vocational skills, learning how to sew, perform basic mechanics and prepare preserved eggs.

The girls spent a good deal of time in a classroom, which had been turned into a tailor shop, making hand-stitched shirts, as well as using sewing machines. Meanwhile, the boys congregated in the mechanics shop, where they learned how to make working light switches and other “basic” tasks, which would have fried my brain and set my hair on end.

But my favorite station was where the students demonstrated how to make preserved eggs. When I’d arrived in Thailand, I’d heard rumors about something called 1,000-year-old eggs, a Chinese delicacy in which eggs are buried for a long time (I’m not sure if 1,000 years is exactly accurate) and then uncovered, cooked and served. I’m an adventuresome eater (during this trip alone I tried chilie crab, barbequed stingray and chicken’s foot as well as chicken’s butt), but an egg that old just didn’t sound appetizing. After all, I’ve seen the remains of eggs that stayed but a few days too long in the fridge; I didn’t particularly care to see the double curse of an extended period of time under the soil and subject to all the elements. So, whenever I’d ordered lunch at the university’s canteen, I’d always avoided the hardboiled eggs with the bright orange centers, assuming they were 1,000 years old and thus 1,000 times gross. However, at the junior high school I learned that they were nowhere close to 1,000 years old; caked first in a thick layer of dark, saline mud and then covered in a lighter layer of soil, the eggs are buried for a mere 28 days before they are unearthed and cooked. The director of the school explained all of this in Thai (while our own director translated), and then went on to describe how the children prepare the eggs to sell at a nearby farm stand. We were all eager to prepare the eggs ourselves, but were too afraid of the consequences of our unskilled hands. I contented myself with trying one of the eggs on my first opportunity. After all, a month under ground is nothing compared to 1,000 years!

As the afternoon came to a close, we had to leave the school for a second tour, this one at a posh secondary school. We were excited about the second tour but sad to be leaving our new friends. We walked hand in hand back to our bus (still parked just beyond the bridge). Most of the students walked barefoot, not taking the time to grab their shoes, which they remove before entering the classroom. The little girl who still stood beside me hopped from one foot to the other, the concrete burning the soles of her feet. One of the older boys slipped off his own shoes and gave them to her, so she shuffled along in shoes about five sizes too big until we reached the bus. It seemed like a scene from half a century ago, until extending her arm she asked me to write down my cell phone number and email address.

“Beautiful, beautiful,” the students called to us, as we ascended the bus. But their compliments could as easily be returned, for I never spent a more exquisite afternoon with such pleasant, easy hospitality.

We were later told by our director that the students had been surprised and overjoyed that we’d taken the time to play with them; normally, those who toured the school looked down on the students’ poverty and didn’t socialize. All weekend the students had talked about what fun they’d had with their American friends. I was shocked and saddened to hear how others before us (none former SEAS groups) had reacted to our kind friends. After all, who could help but enjoy a game of Ring Around the Rosy, no matter your age, socio-economic status or language abilities? It was indeed a “beautiful” afternoon, which left the faces of each of those special students forever imprinted on my mind. I doubt my 8-year-old friend has access to a computer, but I also have a feeling she kept my email address, and I wouldn’t be surprised to hear from her someday. I won’t have forgotten. You just can’t forget something that beautiful.