Thats What Happens When You Come for Tea, Lah 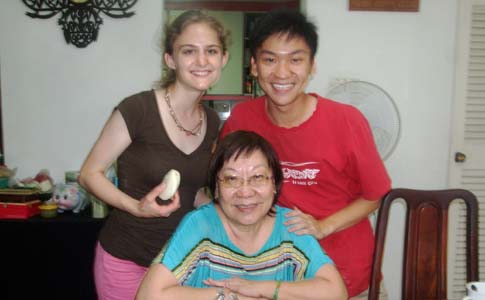 That’s What Happens When You Come for Tea, Lah

Before I post numerous accounts of all of the sights and sounds of Singapore, I would be remiss if I did not explain what I am doing here. And what I mean by that is that unlike the other 25 students of the Carolina Southeast Asia program, I am not a first-year student, and I even traveled to Singapore just last year. You see, I completed the SEAS program last summer and liked it so much that I decided to apply again to return as the research fellow.

What could I be researching in Singapore that I couldn’t research in North Carolina, you might ask. Well, many things. Singapore is a tiny, efficient, cosmopolitan country, more closely resembling New York City than the quiet neighborhoods of Chapel Hill. Singapore also has a bustling business industry, best described by the Singaporean word kiasu, which infers a fear of losing and a fiercely competitive edge. And anyone interested in studying the culinary arts would certainly do well to take a few lessons from the cooks behind the Hawker food stalls, creating such delicacies as chicken rice, nasi lemak and laksa. But I am not studying city planning, business, nor cooking in Singapore.

Rather, as a global studies and multimedia journalism double major, I’m more interested in the very people passing me by in the Mass Rapid Transit station, at the Hawker centers, and at Marina Bay Sands. And what better way to learn more about Singaporeans than to construct a research project in which I get the opportunity to ask them personal questions — questions I might not be able to ask without a reporter’s notebook and a recorder.

I rather enjoy meeting new people, and I’ve been known to meet some of my best friends while waiting in line or sitting in a packed auditorium. And since we began our study abroad, I’ve pulled the “I’m new, what’s cool around here?” card, as an excuse to introduce myself, a few too many times. But my research project tops all excuses to get the nitty-gritty details of what makes each person to whom I talk unique.

I’m studying how gender, ethnicity, age and socio-economic status shape and inform Singaporean identity. For my first interview, I spoke with the mother of my friend, Alexius, who earned a joint degree program from the National University of Singapore and our very own UNC. His mother, Isabel Yeo, is a Chinese-Singaporean in her 60s with a knack for being able to talk about everything. She invited me to her home — the first home in Singapore I’d ever visited — for tea.

Upon entering, I was mesmerized by shelf upon shelf of Chinese teapots, each of which appeared to hold no more than a cup of tea. Alexius told me that his father enjoys a three-cup tea ceremony from those tiny teapots twice a day. He and his mother then went on to explain the four-part Chinese tea-brewing ceremony. According to tradition, you don’t drink the first brew, as it’s too potent; instead, you just wash your tea utensils and cups with them so that they assume the tea’s essence. The second brew, which tastes wild and gamy, reminds you of your youth. The third brew is perfect, so you drink it and think of your prime. And by the fourth brew the tea is bitter and alkaline, serving to remind you of your old age and all the things you want to do before you die.

We also drank tea — the first brew — as Isabel prefers strong tea and so do I, while I interviewed her. What connects the multi-cultural, multi-ethnic society of Singapore? I asked her. The country, which is comprised of over 70 percent Chinese, also has a large minority of Indians and Malays, but according to Isabel, all the ethnicities bond over food and language.

Isabel had invited me for tea, but I hadn’t expected a beautiful spread of Singaporean dishes along with it. She’d fixed an array of uniquely Singaporean dishes, many a fusion between Chinese and Malay culture, which she felt expressed Singaporean identity to a T: steaming Chinese buns filled with a thick green custard called kaya, Chinese sweet potatoes (which were cooked in their purple jackets) and a green pea soup in coconut milk. After just a few bites, I understood how the different ethnicities could so easily come together over food.

And then Isabel told me a story, which demonstrated that bond perfectly. She told me that in the summer of 2011, an immigrant family from China, living in a Housing and Development Board flat, had complained about the potent smell of curry wafting into their apartment when their neighbors, Indian-Singaporeans, cooked dinner. The Chinese family took their complaint to the mediation court to ban the Indian-Singaporeans from cooking curry. Fellow Singaporeans were outraged! And many bloggers took to the net to host a nationwide Cook Curry Day on August 21, in which family and friends got together at each other’s houses to do just that — cook curry — in protest.

“I think it was a very interesting event,” Isabel said, adding that Singaporeans had learned to live in racial harmony. “Because that showed … you don’t complain about peoples’ cooking next door.”

And why should you complain? One of the aspects I missed most when I left Singapore last summer was the variety of dishes available for such inexpensive prices at the Hawker Center — prawn noodle soup for $S2, tempura udon for $S3.50, chicken biryani for $S4. So what if that variety comes at the expense of strong aromas? Some of our favorite dishes back in the South have distinct smells as well — fried chicken, jambalaya, barbeque … And you don’t hear many people complaining about those!

Isabel also mentioned language as a unifying factor when it comes to Singaporean identity. With four national languages — English, Mandarin, Malay and Tamil — all spoken in Singapore, the country houses a cacophony of lingoes and dialects. But you can tell true Singaporeans by their use of Singlish, a mixture of English and uniquely Singaporean words inspired by Chinese and Malay.

“The way we speak in English to our own people can be quite different from the British English, or the, you know, Queen’s English, you see,” Isabel said. “It is injected with lots of local terms, which really gives the accurate feeling or meaning to the word you want to say, the idea you want to express.”

A few examples? Lah, used as a full stop at the end of the sentence, is one of the most common terms. (“The food here is good, lah.”) And another word you’ll quickly become familiar with in Singapore — or at least you’ll at least become familiar with the consequences of not knowing it — is chope. It means “to reserve,” and is often demonstrated by the vast number of tissue packs and umbrellas you’ll see on Hawker Center tables meaning “this seat is taken, proceed at your own risk.”

I couldn’t have asked for a better first interview to jumpstart my project. But more even than the interview, I’ll always remember the hospitality Isabel’s family showed me. Over tea, we talked about her travels to the United States and Australia, as well as stories about her family. She not only opened the door to her home and gave me an inside peek into her everyday life, but she so seamlessly integrated me into her afternoon — I stayed at her house for over four hours! — that I felt as if I were a part of that life, instead of a mere observer.

Isabel wasn’t the only person to mention food and language as two of the key factors that unite all Singaporeans. Malay and Chinese women of all ages, from 15 to mid-60s and from low- and middle-income families, all talked about food and Singlish. But they forgot to mention their hospitality and willingness to share their culture and stories. I guess I should add those commonalities to the list, too, lah.