Student Blog: Ever After from Milan

Emily Palmer, a junior global studies and creative writing student from Durham, is an intern for the Carolina Alumni Review. She blogs for the Review about many aspects of the Carolina student experience and spent her spring 2013 semester with UNC’s Honors Semester in London Program

Ever After From Milan 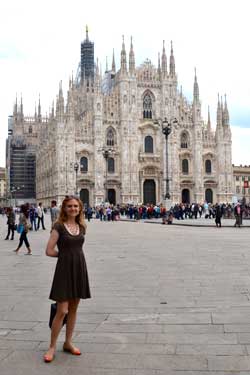 Milan is a city begging for a fairytale. It was practically designed with Disney in mind. A director’s dream: from the Duomo’s lacy lattice-work to the arabesque columns and glass ceiling of the Galleria to the plush red velvet curtains and gold filigreed box seats at The Scala. But instead of a fairytale story, Milan got Ernest Hemingway — not exactly the fairytale type.

The picturesque quality of Milan is forever imprinted on my mind, as it was on Hemingway’s (witness: A Farewell to Arms). No image resonates more strongly than my very first view of the city: coming up the stairs of the metro at the Piazza del Duomo, I was almost overpowered by the frosted turrets of the most beautiful cathedral I have ever seen. Made of white Candoglia marble, the Duomo shone like finely cut crystal in the sunlight — seeming to soar forever into the clouds. The cathedral was one of 19-year-old Hemingway’s favorite places to walk arm in arm with his first love, Agnes von Kurowsky.

Turning around, I beheld Galleria Vittorio Emanuele II and yet another one of the couple’s old walking grounds. The Galleria is the world’s first shopping mall, and its grandeur begs the question why anyone ever bothered to build a second, for none compare to the magnificent intersecting glass arcades that dome above the rows of posh shops. Inside the Galleria, I wound my way through intimate sidewalk cafes with red geraniums blossoming over their terrace boxes and wandered past clusters of people sipping their cappuccini and macchiati during their work break or meeting with friends for leisurely lunches.

The shops glowed like melted candlewax — Prada, Louis Vitton and the art bookshop Libreria Bocca were each outfitted with elegantly sloped arches and bowing marble figures. I glided over intricately designed mosaic floors and up to the third floor of Gucci, where I plumed and preened in pumpkin pumps, swirling about the loft as if all those hundreds of heels were in my own personal closet. I was assigned a personal shoe-fitter, Michele, who brought down several boxes. I opened them with Christmas morning excitement, exclaiming as I slid the leather shoes over my heels and checked all of the angles in the mirror. At over 500 euros, I had to leave the heels behind, but as I tore myself from the shelves and descended the staircase to the outside, Michele whispered words of solace. “If you change your mind,” he said, “we’ll be here, waiting for you.”

My first night in Milan I treated myself to an evening at the opera in the famed Teatro alla Scala (heavily referenced by Hemingway in A Farewell to Arms) and found myself in my own private gold-filigreed box seat, surrounded by plush red velvet curtains and immersed in the modernized drama of “Oberto Conte di San Bonifacio.” The romantic tragedy which was about love, deception and ultimately redemption and murder was performed with all of the gusto and bravado universally expected of operas yet also containing the eloquent subtlety inherent only to the very best productions. The audience practically hung over the balcony clutching at every grand, operatic breath. I was so close to the stage that I could see the stage director’s hands flitting back and forth behind the opera box situated at center stage.

I spent the first 15 minutes of the production searching for the subtitles and then realized that most of the audience understood the Italian opera. So I hung onto every word that I understood and made up the rest, later checking my re-creation against fact on Wikipedia, when I returned to my hostel that night.But even without a full understanding of the storyline, I appreciated the historical importance of the evening — watching an opera that debuted in that very theatre over 170 years before. The characters and scenery had been modernized, but the predicaments and situations were much the same.

During the intermission, I wandered through the marble halls, with grand gold cherubs bursting from the ends of tall white columns, and sipped a macchiato with the other guests. I basked in the unrushed luxury of fine coffee and good opera, enjoying a few hours to escape from the busy city streets to pull for characters wracked in the agony of their own twisted lives. The curtain fell to a boisterous standing ovation. Only over the sumptuous curtsies and bows did the performers break character and allow opera aficionados to call out their real names.

I rejoined the city streets pampered in the comfort of others’ sorrows; that is, an Italian opera is an excellent self-esteem booster. You always leave thankful that your life is not nearly as terrible or complicated as those of the characters on stage. So filled with the magic of the evening, I could hardly bear to return to my hostel and admit its end. Instead, I returned to the Galleria for dinner. Feasting on pasta carbonara and tiramisu, I watched couples strolling arm in arm under the domed structure and was reminded of another couple: Ernest and Agnes.

But the Milan that I enjoyed that first evening — and indeed for the duration of my travels — was somewhat different than that of Hemingway’s Milan in 1918. Unable to join the army due to poor eyesight, 18-year-old Hemingway registered as a Red Cross ambulance driver. He reported for duty in Milan and was quickly stationed in the small town of Schio. He returned to Milan later that year when he was injured while pulling a fallen soldier out of harm’s way. He met Agnes in Milan. She was a Red Cross nurse, who would later break his heart when he returned to the states, expecting her to follow. In her place came a letter: confessing her love for an Italian officer. (Hemingway’s A Farewell to Arms almost perfectly mirrors his own life: the protagonist, Lt. Frederic Henry, an injured ambulance driver for the Italian army, recuperated in a hospital in Milan, where he fell madly in love with his nurse, Catherine Barkley. Only the ending is different. And it’s certainly no fairytale ending for Catherine.)

I wanted to see Milan as Hemingway first saw it, so I returned to Garibaldi Station, where Hemingway first set foot in Milan. The station has long been torn down and replaced by statues in Piazza della Republicca. In its place: Milano Centrale, one of the main European train stations built to accommodate large numbers of travelers. But while Hemingway’s situation (injury and recuperation) in Milan was quite different than my more luxurious experience (opera and pasta), much of Hemingway’s Milan still teems with activity, save the Red Cross hospital where he recuperated. It has been replaced by a bank.The Galleria and Duomo are still favorite places for couples (and singles alike) to pass through, and Hemingway’s splattered references to Via Manzoni, the Scala and La Cova in A Farewell to Arms cannot go unnoticed by the attentive reader.

Walking down Via Manzoni, the street where Hemingway recuperated in the Red Cross Hospital, I eventually came to the Golden Rectangle and La Cova, an elegant cafe famous for its expensive coffees (about 15 euros if you sit) on Via Montenapoleone. La Cova is where I learned about the merits of standing (with the locals) at the bar. Refusing a seat more than cuts your bill in half. (Befriend the lady at the pastry counter and you might just get a piece of cake thrown in, too!)

The warm glow of the display window, featuring frosted cakes ringed with chocolate ganache and whipped cream and topped with fresh berries, greeted me at the entranceway. As I made my way inside and pushed through the hordes of businessmen on their mid-morning coffee breaks, Hemingway’s description of the cafe in the short story “In Another Country” ran through my mind:

We ourselves all understood the Cova, where it was rich and warm and not too brightly lighted, and noisy and smoky at certain hours, and there were always girls at the tables and the illustrated papers on a rack on the wall.

I became one of the crowd in Hemingway’s Cova.

The Cova, and in general, Milan, is where I fell in love with Italian coffee. Milan introduced me to the macchiato and to the cappuccino. It is in Milan that I learned that coffee is not just a beverage, it is a passionate art form. From the Cova to Caffe Duomo, bartenders would good-naturedly compete to compose (and compose they did!) the best and most beautiful cappuccini. Leaves, smiley faces and sunrises — all designs sprinkled in chocolate and bestowed on me with the order of “uno cappuccino.”

While Agnes never followed Hemingway back home after the war, Hemingway’s love for Milan did not end with the relationship. Even Hemingway’s rather terse language cannot help but infuse the poetry of the city into his prose. And I found that preserved love for the city is still deserved almost a century later. The warmly lit windows of The Cova, the wine shops along the sidewalk, the open-air Galleria are all still there. And the Duomo — the cathedral “white and wet in the mist” — is just as beautiful as Hemingway describes it. And once again, I’m back with the lieutenant and Catherine:

We walked along. There was a soldier standing with his girl in the shadow of one of the stone buttresses ahead of us and we passed them. They were standing tight up against the stone and he had put his cape around her.

“Nobody is like us,” Catherine said. She did not mean it happily.

“I wish they had some place to go.”

“It mightn’t do them any good.”

“I don’t know. Everybody ought to have some place to go.”

“They have the cathedral,” Catherine said. We were past it now. We crossed the far end of the square and looked back at the cathedral. It was fine in the mist.

Milan may not be the setting of many fairytales. But then again, I think Hemingway would like to keep it that way. And, we’ll always have the Duomo.