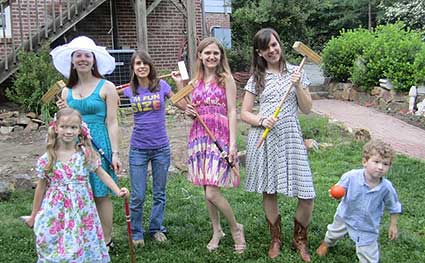 The Perfect Study Break in my Professor’s Backyard: A Jane Austen Garden Party and High Tea

Friday after the first day of exams found me playing croquet with a group of friends at my professor’s house. The backyard where we played overlooked a cascading waterfall and fishpond punctuated with several beautiful Japanese statues. We’d just enjoyed high tea, feasting on blueberry scones, strawberry shortcake and miniature cucumber sandwiches — the very flavors of spring — and we were awaiting the judge’s verdict to determine the winner of our Jane Austen trivia contest.

But how I came to whack a ball around my professor’s backyard — and whacking is certainly the best way to describe my rather mediocre croquet skills — requires explanation. And the reasoning goes back to my infatuation with Jane Austen novels.

If I were ever to consider joining a cult, it would probably have something to do with Austen’s works. My idea of a perfect evening involves watching the six-hour A&E version of Pride and Prejudice on repeat. When I was in high school, I had the chance to meet Colin Firth (A.K.A. Mr. Darcy), who was filming several scenes of a movie at my church; the photograph I have with him remained my Facebook profile well into my freshman year of college. Also in high school, I started a Jane Austen book club, in which several of my closest friends would get together to discuss an Austen novel over tea and dessert. So when I say that I’m an Austen fan, I’m not exaggerating.

And that’s why when I found out that I could take a course at UNC solely dedicated to Austen’s works, I rearranged my entire schedule just to take the comparative literature class. In “Global Jane Austen,” we read each of Austen’s six completed novels, as well as some of her juvenilia and unfinished manuscripts. In addition, we had the chance to see how people around the world had interpreted her works by reading novels like Tanizaki Jun’ichirō’s The Makioka Sisters (Japanese) and Alexander Pushkin’s Eugene Pushkin (Russian) and by watching films like Bride and Prejudice (Indian).

But the class developed more than our mere analytical and literary skills. Over the course of the semester, we all bonded over our admiration for Austen’s works. We gathered at our professor’s house for movie screenings and pizza parties, met her children and became part of a greater Austen family.

I became further immersed in this Austen community when I applied for and received a Summer Undergraduate Research Fellowship to conduct research on the evolution of Mr. Darcy’s Pemberley estate, first described in Pride and Prejudice and later depicted in film adaptations of the novel. This summer, with Professor Brodey serving as my adviser, I plan to conduct Skype interviews with estate managers and film personnel to understand the process of selecting the estates used in the film adaptation. Then, this coming spring I hope to bring that research to life by touring the estates when I study abroad in London.

When I initially drew up my research proposal, I was overwhelmed by the logistics of establishing interview contacts abroad. But after emailing several professors and TAs at UNC, I was once again overwhelmed — but this time in a good way — about the level of support that I had received. And within 24 hours of sending my initial email, I had heard from Robert Clark, Reader in English at the University of East Anglia in Norwich, who is a Jane Austen scholar and who offered to help guide my research. Talk about a large and embracive Austen family!

So it was only natural that the end of the school year should bring about one last Austen party — to celebrate what Austen herself truly valued: quality social interaction and intellectual conversation. That I discovered that I am completely skill-less when it comes to croquet and that I performed rather poorly on the Austen trivia contest is no matter. For I thoroughly enjoyed laughing with my friends at my failures in both and then turning the conversation toward the professor’s children — how Henry was using his croquet stick as a mallet for chopping wood and how Clara’s guinea pig, Lila, was eyeing the strawberry shortcake.

In the height of final exams — but in the company of good friends and enjoying high tea and a picturesque landscape — we could remove ourselves from the academic grind to better appreciate the true merits of our education.