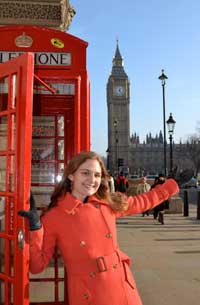 I’m studying abroad with UNC’s Honors Semester in London program. The first week has been filled with a dizzying array of sights and sounds, top among them shows at the National Theater and West End, trips to the Tate Modern and Buckingham Palace to watch the changing of the guard, camping out at the London Eye, one of the largest observation wheels in the world —  to take part in a street artist’s endeavor to compile different viewers’ photographs of the capital — and, of course, taking that all-too-touristy photograph with the red telephone booth and Big Ben.

While studying abroad, I’m taking a course in “Contemporary British Art,” which takes us to many of London’s most distinguished art galleries and museums. First stop: The National Portrait Gallery to become one of the first to see Kate Middleton’s portrait after its unveiling earlier this month.

While I thoroughly enjoy art galleries, I tend to skip over the portraits, preferring scenes that tell a story, that show interaction between people, creatures and places. Not just a posed and composed — often stiff — depiction of a person I’ve never met. But when I heard that we’d have the opportunity to view Kate Middleton’s, I was thrilled. Here was the opportunity to see an artistic rendering of someone whom I’ve actually seen before in real life. I’ve heard crazy stories about her — like how she always wears the same pair of shoes — and I’ve enjoyed the many photographs of her extravagant royal wedding. Plus, we all know that Kate stole the crème de la crème of the royal family. I’d take William over Harry any day of the week.

A brisk walk from Winston House (Carolina’s own London hub for study and research abroad) to the National Portrait Gallery soon brought us face-to-face with Kate. Only it wasn’t Kate. At least, not as I know her. She was hardly recognizable. If I hadn’t been told that “this is the portrait of Kate Middleton that you’ve heard so much about,” I’d have passed right by in search of it. The critics are right: In the portrait, she appears older than she actually is, almost approaching middle age, when in fact she’s only 31. Apparently she approved of the portrait before it went on display. I think she needs glasses. The portrait depicted her with pursed lips and bags under her eyes. The only good aspect of the portrait was perfectly fluffed hair — bigger and better than even stardom will allow. I’m not sure what she was wearing, but I’m pretty sure that the drab blue shirt was a figment of Paul Emsley’s (the painter’s) imagination. Apparently, Kate sat for only two sittings, and the artist modeled the rest from photographs. Not sure where he got the photos, but I’ve certainly never seen them.

Nearby was a portrait that really put Kate’s to shame. In a simple frame was a small portrait of Cpl. Johnson Beharry, a soldier who served twice in Iraq and earned the Victoria Cross, the British military’s highest honor. Twice he saved his army vehicle of men from an onslaught of fire, the second time suffering life-threatening injuries and still managing to drive his men to safety before losing consciousness. Beharry became the first living recipient of the Victoria Cross in more than 30 years, but the honor came at a high cost: serious brain injuries, which, in his own words, make him feel as if ants are crawling inside his head. The portrait — truncated and compressed — speaks volumes to Beharry’s persona and circumstances. The small proportions and simple framing of Beharry’s portrait are in stark contrast to that of Kate’s, but while Kate’s portrait tells the viewer nothing about her, just looking at Beharry, I felt as if I knew him and maybe even understood (a little bit) what he still goes through today. The narrow portrait focused my eyes on Beharry, calling attention to the scars cutting across his hair and the stiff posture of everything from his shoulders to his hands. With nothing to distract me from his features, I almost felt as if I, too, had ants crawling around in my brain.

After taking a look at painted portraiture, we moved on to photograph portraits of the royal family. Again, many of the girls were reminded of William’s merits over Harry’s. A black-and-white portrait of William on his 21st birthday in a tux and white bowtie, head slightly ducked, showed the man within — someone shy and introspective, a stark contrast to Harry’s “every man” color portrait, also taken on his 21st birthday, posed by his motorcycle and grinning widely at the camera. We discussed the merits of black-and-white and color photography and why certain choices were made: black-and-white tends to allude to permanence, while color can add interest and make viewers feel as if they, too, are present with the subject. We then continued on to the “Taylor Wessing Photographic Portrait” exhibit.

We passed through a number of fine portraits, but I was particularly struck by one of Giles Duley titled “Becoming the Story.” Again, this one has its roots in the global war on terror, this time in Afghanistan. Duley is a photojournalist who lost both legs and one arm when he stepped on an IED while documenting humanitarian issues in the war. When he found out that he’d lost three of his limbs, he remarked that he was glad to have his right arm because he could still take photographs. For his self-portrait, Duley propped himself on a black plinth — an allusion to a famous sculpture that lost limbs to the dustbins of antiquity and now sits in the Louvre. Head held high and resolute, looking far into the distance, Duley’s was a portrait filled with hope. Although an amputee, his portrait was not about disability but rather ability in the face of adversity.

From Kate’s new portrait — an example of everything that portraiture shouldn’t be — to the soul-moving portraits of those wounded in war and even the light-hearted photographs of the young princes celebrating a birthday not so significant over in the U.K., I learned a great deal about the importance of portraiture. The next time I go to an art museum, I don’t think I’ll so easily pass over the portraits. Even if I don’t know the subjects — as I didn’t know Duley before seeing his photograph — I know that, if it is a good portrait, all I have to do is take the time to look at the portrait, and I’ll meet someone new.