Student Blogs – The Charms of Chawton 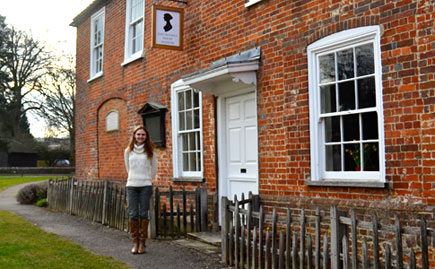 The Charms of Chawton

Jane Austen is known as the author of six incredible novels, most famous among them Pride and Prejudice, which has been adapted into numerous films in all corners of the globe. Her critics argue that the woman herself had a very limited life — and it is true that she didn’t travel outside the country and died only a few miles from her birthplace in Steventon, but as the author herself once expressed, much can be experienced within the confines of a country town. I had not properly appreciated this sentiment until I took a journey to Chawton House, Austen’s quaint Hampshire abode.

Boarding a train from Waterloo station in London, I set out on a day’s solo journey to the author’s house for a writing workshop titled “ ‘But Intricate Characters are the Most Amusing’: Relationships, Characters and Conflict.” Already in my correspondence with the manager of marketing and events at the Jane Austen House Museum, I had experienced something unlike the fast-paced and harried lifestyle of London; while the workshop had been filled for weeks, Madelaine Smith agreed to let me overenroll in the course. I was ecstatic: the opportunity to write and workshop with others on the very grounds that my favorite author penned her last works.

Ever the planner for a thousand things to go wrong, I left on an 8:30 train for an hour-long journey, even though the workshop would not start until 11. Still, I was right to plan ahead: The train system broke down between Farham and Alton, and we had to catch a bus. Still, we managed to arrive only a few minutes later than initially planned, meaning that when I called the cab company to say I’d be late and then arrived early, I was angry with myself for being too efficient. But somehow, Alton seems to operate on a very different system than the stereotypical small town: No one was late. My cab, rescheduled for 10:15, arrived shortly after 10, and I waited not long at all with the receptionist of Wilson’s Cabs, a service with only two drivers.

Kit drove me both ways, and we chatted the entire time.

“Well, you’re just gonna love today,” he said. “’Course, after the workshop, you should head down to the library.”

Although he didn’t say “library.” It came out more like “lie-bree.” Other words came out so fuddled that I just nodded and smiled and laughed where I deemed it appropriate. For two people speaking the same language, I definitely felt like a foreigner and hoped he didn’t realize that half the time I had no idea what he was saying. Still, we managed quite well during our short journey — all about him growing up in London, getting married and moving to Alton.

“Much better here,” he said. “You can breathe. Not rushing all the time. ‘Course-sometimes-I-forget-I’m-not-‘n-London-‘n-I-talk-t’-fast.”

And boy, did Kit talk fast. As if all the words poured out at once in a jumble. We’d arrived at Chawton House, but we were so deep in conversation, he showing me the best pub for lunch, the tea house down the street and then pointing to the end of the lane. So I thought perhaps I had to walk the rest of the way. He laughed at that, rubbing the tears from his eyes. “Hafta walk!?” he wheezed. “But you’re here. There’s the gate!”

I fumbled with the pounds sterling as he opened the door for me.

“What time do you want to come back?” he asked. “Fifty-fifty chance, I’ll be the one drivin’ yah.”

He pointed down the lane again. “Be sure to head to the lie-bree,” he reminded me. “Definitely worth a visit.”

The workshop started at 11, but we were invited to arrive as early as 10:30 for tea and biscuits. Arriving 20 minutes early, I stood outside the gate, rubbing my hands together to keep warm. Then, as no one was around, I easily stepped over the loose chain and wandered into the gardens. I was greeted by the curator and invited to keep warm inside the workshop room, although “we’re just now setting up.” And in the same breath, “Can we get you a cup of tea?”

Growing up in the South, I’ve always been taught to pitch in, whether asked or not. So when Olive Drakes, an elderly volunteer at the house, who stands at no more than five feet on a good day, asked me if I could reach the teapot on the top shelf, I immediately offered to help set the table.

Nothing says comfort like a steaming cup of Assam tea, laden with milk and sugar. And Olive was just the sort of lady to make it. “Do you take cream?” she asked me, pouring with a steady hand.

As I sipped, I helped lay out the cookies — or biscuits as they call them in England — four different varieties: chocolate chip, Belgian chocolate, white chocolate and chocolate-covered sugar. With the teapot, pitcher of cream and two bowls for sugar — light and dark — I felt as if I were right at home.

The workshop started promptly at 11, with most people filing in just minutes before. All of us took our places around small circular tables as Rebecca Smith, the workshop facilitator, led introductions. It was evident from the get-go that we were all ardent admirers of Jane Austen’s works. The facilitator herself was the author of four published novels, the latest of which is titled Jane Austen’s Guide to Modern Life’s Dilemmas and was inspired by her yearlong position as the Writer in Residence at Chawton House. Two girls, about my age, had come all the way from Naples, Italy, for a Jane Austen holiday. After Chawton House, they were heading from Bath and from there to London to see what they called “King Lion,” a West End musical admittedly not Jane Austen but still certainly a classic.

Another woman, a middle-aged school teacher from China, had come with a different purpose in mind: She was developing a computer program based on Pride and Prejudice that would teach students at Shanghai High School how to speak English. Her idea was inspired by Austen’s incredible popularity in Asia, particularly in China and Japan, and is being sponsored by O2, a U.K.-based mobile phone company. And two other women, young mothers and aspiring novelists, had attended another one of Rebecca’s workshops a few years before and started their own intimate writing group, meeting every three weeks in Winchester.

Austen wrote often to her niece, Anna, (an aspiring novelist herself!), giving her writing advice. Austen told Anna that she wrote as if on “a little bit of ivory, two inches wide on which I work with a brash so fine as to produce little effect after much labor.” And while that fine style is difficult to emulate, emulation was not our goal. Like Austen, proud of her own writing style, we’d come together to improve our own styles, and hopefully make them just a little more worthy of that small piece of ivory.

Over copious cups of tea, we began writing, working our way from different styles of introducing a protagonist to distinct modes of illuminating characters through their relationships with both friends and antagonists. Throughout the afternoon, we’d pause to share our work or to read aloud excerpts of Austen’s works. Pride and Prejudice inspired each lesson: how to introduce a protagonist, how to draw points of comparison between characters through the use of best friends and sworn enemies, how to further draw out a character through the use of gifts and surprises.

A mastermind of character, Austen wrote some of the most unforgettable heroines of her time — heroines that have been brought back to life again and again through a number of depictions both on the screen and stage. We did not aim for that level. But then again, neither did she. And I doubt that she could have ever imagined how acclaimed her works would become. Now, 200 years after the publication of Pride and Prejudice, readers from all across the world are still reading her novels.

Although her family supported her work, Austen was not able to profess her own success. Sense and Sensibility, her first published novel, was published anonymously, through the help of her brother, Henry, and the next, Pride and Prejudice was published as “by the author of Sense and Sensibility.” Hardly the level of clout and congratulation that her works deserved. Playing two hours at her piano every morning, Austen often hid the fact that she was writing, choosing not to fix the creaky door that led into her study in order to give herself ample time to hide her pages beneath a book before company came in. In the workshop, we were not working under those same constraints. Modern-day women authors enjoy high clout in the literary community. Just take a look at J.K. Rowling’s success and you know that she wasn’t busy hiding her quills and paper.

During our lunch break I toured Austen’s home. Walking through the creaky door, I had the chance to see the small writing desk where Austen could often be found hard at work. Trying my own hand with a quill, I only managed a very few shaky words before the ink dried up (and so did my patience). But through my visit to Chawton, I gained a better understanding of what motivated Austen to keep writing — despite finicky quills and social pressures to the contrary. When the workshop ended, I took a brisk walk to the Chawton House Library, a large estate where Austen’s brother, Edward, resided. The approach with a circular drive was quite picturesque. Off to the side was a small churchyard and gravesite, where many in the Austen family are buried. Pastureland and a schoolyard mark the short walk to the estate. The sheer beauty of the countryside would be enough to inspire Austen’s heroines to go on long walks seeking adventure.

I spent entirely too much time at Edward’s home … meaning I had to run back to the museum (and was still late) for the cab that I’d scheduled earlier that day. Unlike the cabbies in New York or London (or just about any big city for that matter), my good friend Kit didn’t charge me until I hopped in. He just said he’d wished he’d driven up to Edward’s house instead. He’d suggested it, after all, so he should have known that’s where I would be. “No reason to make yourself all out of breath,” he told me.

And as we parted ways at the train station, Kit said he’d miss me. “I rather liked our conversations,” he said.

And I agreed. Yes, the countryside of Alston is beautiful. But it is the characters that make up the town that truly define it. And I think it was those characters that inspired some of Austen’s most dynamic heroines. She probably met Lizzie walking down a lane. And I bet there was a coachman named Kit.