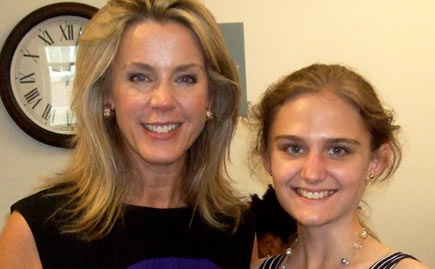 I’ve enjoyed watching Inside Edition with Deborah Norville ever since middle school.

That’s about the same time that I decided I wanted to be just like Angelina Jolie. Down to the fixed smile and six children. I’ve since wizened up — on the Jolie obsession, anyway. As for Inside Edition, well, I’ll just call it a guilty pleasure.

And that’s why when I found out that Debbie was coming to campus, I was *just a little* thrilled.

Jim Hefner ’72, a journalism professor who helps produce Carolina Week, our campus newscast, had invited me — along with the rest of the crew — to lunch with the anchor of Inside Edition last Friday.

Coming straight from volunteering, I was a few minutes late to the meet and greet. But I figured with lunch before lecture, I could easily grab a plate and slip in line without calling attention to myself.

Wrong. The large lecture room and buffet line I’d been expecting turned out to be an intimate room with a long table and a few pizza boxes. There was no way to enter but from the front, and the students were smack dab in the middle of introducing themselves.

“Where are you going?” Debbie called out. “Come sit by me,” and she patted the seat — at the head of the table — beside her.

I couldn’t turn Debbie down. So, I headed to the front, bright red and suddenly very conscious of the loud clackety clack sound of the blue heels I’d especially picked for the occasion.

When I say that I’ve been a fan of Deborah Norville, I don’t mean that I knew all that much about her. Quite to the contrary, actually. I knew little more than what I viewed as flimsy celebrity coverage.

Wrong yet again. Turns out, it’s more than red carpet glitz and glam for the two-time Emmy-winning journalist. Hours after the twin towers fell, Norville covered the tragedy from the nation’s capital. She traveled to Rome for Pope John Paul II’s funeral. And she covered President Barack Obama’s inauguration. And that just for Inside Edition, the show she’s anchored for 17 years. Before that she co-hosted NBC’s Today program, anchored several of her own shows and also anchored Street Stories.

But Debbie didn’t come to Carolina to talk all about her past career — at least, not to talk in a self-indulgent fashion. She really came to talk with us about journalism and how to get into the business.

We wracked our brains.

“You’ve got to have that answer every day,” she told us. “That’s the question I always ask anyone I’m interviewing to be my assistant.”

She said we should be prepared for some pretty shoddy stories in the beginning. “But always have another story in your back pocket,” she said. “So you can pull it out and report on something meaningful.”

In the beginning, she tried this tactic, as well. She said her bosses liked her ideas … just not for her. They gave the stories to the more proven reporters. That’s when she started securing sources ahead of time — sources who would speak only to her.

And another piece of advice: “Never hire an agent for your first job,” she said. “You’ll need 10 percent of whatever measly salary you’re earning.”

Instead, “email me, and I’ll give you advice for free,” she promised, repeating her address five or six times throughout our conversation.

And that’s just what it was: a chat with Debbie over pizza. Can’t get more casual than that. She talked about her life, professional and personal, ups and downs, Emmys and depression, losing jobs and becoming comfortable with who she was, without all the labels.

And if you look at her website, you see the same passions and interests reflected. Tabs include more than just news about her career, although journalism has certainly made up a large part of her life. Because “Crafts,” (especially knitting — she has her own yarn collection) “Books” (she’s published six books on topics like gratitude and respect, and for the latter she interviewed a UNC psychology professor; as well as several children’s books), “Family,” (she’s the proud mother of two, and her eldest son is at that unmentionable university next door), and “Inspiration” (she’s a strong Christian, who can almost always be found with a cross around her neck and a word of encouragement for those struggling with their faith) have shaped her into the person she is today.

Ultimately, we talked about the journey of life as much as the track to journalism. Maybe that’s why when our plates were empty and the scheduled time had run out, we were all still talking about everything from resume advice to our excitement over getting to Carolina. And afterward, most of us had one more request. Just one photo, please.