Carolina Traditions Alive and Well in 2012 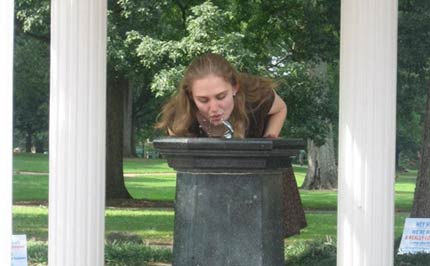 Carolina Traditions Alive and Well in 2012

Carolina traditions. They’re such an integral part of my UNC experience that sometimes I have a hard time distinguishing tradition from routine.

First day of school: Drink from the Old Well.

Halloween: Dress up and parade around Franklin Street.

UNC-Duke Game: Paint up for the game and storm Franklin Street after the big win.

My True Blue, a book filled with a list of 100 Carolina traditions every student must complete before graduation, is a sacred text in my dorm room. I keep it in my top drawer, along with my Bible. And I’ve been known to uproot my entire room when it has gone missing.

I guess my intrigue with tradition goes a little further than just a comprehensive list. I’m also a history mongrel. Now this assertion would surprise most friends. I am bad with dates, including best friends’ birthdays. I prefer novels to biographies. I avoid history classes at UNC like the plague. (I’ve put off the two I need for major credit until senior year.) And I never watch The History Channel. But this does not mean that I hate history. Just the textbook version. I prefer the more personal side of history. The side that may or may not have happened, but wouldn’t it be fun if it had? I like the stuff of stories. The stuff of myth. The stuff of great campus tours.

And that’s why for this year’s Week of Welcome, I attended almost every specialty tour that the UNC Visitors’ Center had to offer, starting with the Carolina Classic and continuing with the Black and Blue, as well as the Chapel Thrills and Chills tours. While the first tour centered on significant landmarks and infamous Chapel Hill stories (for instance, Rosemary Street, right off of Franklin, got its name from the two residents who lived on either end: Rose and Mary), the Black and Blue Tour took a turn for the serious, acknowledging how African-Americans have largely been overlooked in UNC’s history. And, of course, I topped off the week on a lighter note with a late night tour of campus, learning about the town’s most thrilling tales, like the legend of Gimghoul Castle, the site of the secret society’s (the Order of Gimghoul) headquarters and the resting place of a stone steeped in the blood of a fallen lover who died in a duel over the much-sought after belle, Miss Fanny, who was also the daughter of the UNC president. I had heard of this stone. In fact, last year, I may or may not have attempted to cross Gimghoul private property and may or may not have seen several hooded figures, who may or may not have released hounds on us. We definitely jumped over a stone wall and ran as far as the Chapel Hill Cemetery before we were sure they weren’t on our heels.

The Chills and Thrills Tour did enlighten me to another Chapel Hill ghost story, however, this one centering on Dr. William Jacocks, a prominent physician said to haunt The Carolina Inn. Apparently, he lived at the hotel for 17 years and even after his passing, continues to inhabit his second floor room and locks out guests who invade his privacy; patrons (even those who have never heard that the room is haunted) complain of someone opening the curtains and tickling their toes during the night. And one woman complained that the maid had taken a shower in her room: she had the footprints in the bathmat to prove it. Only it wasn’t the maid. Patrons see a jolly old man passing through the hallways, but he only shakes his head and laughs when they say, “hello.” I don’t blame Dr. Jacocks. With the posh rooms, elegant décor and superb dining, I wouldn’t want to leave The Carolina Inn, either.

Actually, I don’t want to leave Chapel Hill at all. As a junior, I, like so many of my classmates, have reached a crisis point. We have approached the halfway mark of our time at Carolina. Reality breathes down our necks and nostalgia tugs at my heart. Maybe that’s why I’m infatuated with Carolina traditions. Because they are a promise that some things will remain the same, even after I’ve graduated.

That’s also why I’m looking forward to the Carolina Alumni Review’s 100th anniversary edition, coming out this September/October. It commemorates 100 years of recording and publishing the happenings of our great university.

Over the summer, I had the opportunity to pull files on some of our more noted (and not so noted) students over the past 100 years. Students who had been mentioned in the Class Notes section or been featured in the magazine. Occasionally, as I pulled files, I couldn’t help but open them up and peek inside: old family photographs and forms filled out by students during freshman orientation, newspaper clippings and letters written to and by the student.

One particular file, about a not-so-noteworthy student (i.e., not a Michael Jordan or an Andy Griffith, the latter of which has his file kept in a fireproof safe and the former of which is probably better guarded than the Sorcerer’s Stone itself) grabbed my attention. I’d opened the folder to differentiate between two students with the same name. The one I was looking for lived in Goldsboro, the other did not. But what started as a quick fact-check turned into a 20-minute indulgence. The student had studied at the University in the 1920s, and his beautiful, scrawling script arrested me. I felt as if I knew the man just by his handwriting. Sitting on the floor amongst long rows of files, I was riveted to the contents of this one particular folder. And I couldn’t put it down until I’d thumbed through each black-and-white photo of the boy’s youth and read every letter and form he’d written and we’d saved during and after his stint at the University.

I no longer remember the man’s name. But what I do remember is that his life and story, unexplored for so long, were at my fingertips and in my mind for an entire afternoon, so many decades later. And as I studied the picture of a sandy-haired toddler posed in front of a tall brick wall with a wooden house behind it, I couldn’t help thinking back to old heirloom pictures passed down through my family, as well as photographs from my own childhood. And I wondered, all these years in the future, if another intern would one day pull my file and see faded pictures and yellowed news clippings, enjoying the story of another UNC student back in 2012. It made me think how much I value our university’s dedication to tradition.